Illustration shows with non-straight lines which sounds sound equally loud through different frequencies as hearing sensitivity depends of sound frequency. For example lowest dotted line shows common hearing threshold which depends hugely on frequency. While people may hear 1000 Hz at 4 dB they may hear 3000-4000 Hz with -5 dB but even with healthy hearing 20 Hz would need to be at least 75 dB to start hearing. Resonance in auditory canal is reason why 3-4 kHz are well heard and another smaller resonance frequency is around  13 000 Hz. Loudness is measured in phons and it commonly overlaps in numerical value with dB at 1000 Hz.

Decibels measure sound intensity which can be measured in watts per square meter with 120 dB transferring sound energy of 1 watt per square meters (10 extra dB causing 10 watts per square meter and so on). Changing sound intensity 10 times changes dB value by 10. If sound is million times more intense then it has 60 dB extra. Common pain threshold is about 130 dB which is about 10 trillion times more intense than hearing threshold.According to 1st illustration hearing threshold varies by 80 dB which means 100 000 000 fold weaker hearing with 20 Hz compared to 3-4 kHz.

Subjectively heard loudness is measured in phons and that varies way less than dB. 10 dB difference means 2 fold loudness difference and with 80 dB loudness varies 256 times (2 to the power of 8).

Loudness also depends if one frequency gets louder or if several different frequencies are heard. If hearing same frequencies like violins, then about 10 times more violins are needed to double the loudness people hear as same cochlear neurons would need way more energy to feel like noise doubles compared to hearing 2 different frequencies which can seem to have double loudness as they activate separate auditory cells.

This YouTube clip of 20-16 000 Hz sounds is good proof of how sound seems to get increasingly loud (~200 fold increase in loudness is to be expected) as it gets closer to 3000-4000 Hz then after that it becomes quieter and then gets bit louder again at 13 000 Hz. For example i used sound levels where i barely heard 30 Hz with earphones on but it grew so loud without adjusting volume that i could hear 3-4kHz with earphones meter away from me.

Sonar nowadays sound often very different from bing-bing that submarines do or how movies usually make those sound. Now they are often chaotic screeching around 3000-4000 Hz (mid frequency sonar) which is pretty much loudest frequency people can hear and those modern sonars are way louder (up to 220 dB if 1 meter away from source) with audible range of 100 km. These sonars supposedly have better range than underwater radars but these loud sonars cause death among whales and dolphins. 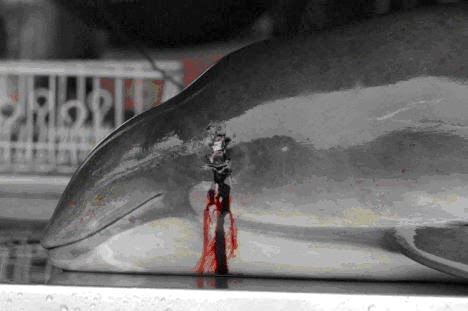 Sounds of seas is one documentary about the risks of such noise. Many animals that reach beach are bleeding from eyes and ears. In addition to outer problems they were bleeding in their brains with blood visible as dark areas around brain and in skull cavities. They also had bubbles in their organs and blood vessels as high intensity sound and ultrasound can cause bubble formation in bloodstream (fast surfacing can also cause bubbles as parallel cause). Lower jawbone of whale resonates sounds and it resonates most actively between 3-4kHz. This vibration can release fatty pieces which also clog circulation.


Examples of 3600 Hz and 3800 Hz which people hear well and which vibrate skulls of whales quite strongly. I listened to these sounds for about minute as quietly as i could and that was enough to cause half hour pain in ears along with tinnitus which seems to sound like 3-4 kHz no matter what caused tinnitus. Whales may seem confused about where such sound comes from and this resonance may be cause. When i heard it louder with source meters away i had trouble hearing direction of source as it seemed to fill room and also come from my head as sound amplifies in hearing canal and creates louder unpleasant sound inside head.

Maybe one reason for these horrible sounding sonars is to deter scuba divers from planting bombs as that noise would disorientate them and kill them with internal bleeding and blood bubbling before they reached ship.
Human pain threshold of 130 dB is about billion times less intense than 220 dB which in turn is ~500 times louder than pain threshold. Sound wave pressure reaches 1 atmospheres at 194 dB and with extra 30 dB it can become 1000 atmospheres which would shake nearby creatures with ~1 ton per square centimeter 3000-4000 times per second so no amount of self control would get saboteurs near ships without dying.

you are clear my mind actually after reading your article i got clear my complete doubt. thanks for such easy understanding post. Sharing on Why is 194 db the loudest sound possible? for future aspect at here http://electrotopic.com/why-is-194-db-the-loudest-sound-possible/