Effects on behavior by COMT (dopamine, adrenaline and noradrenaline degrader) 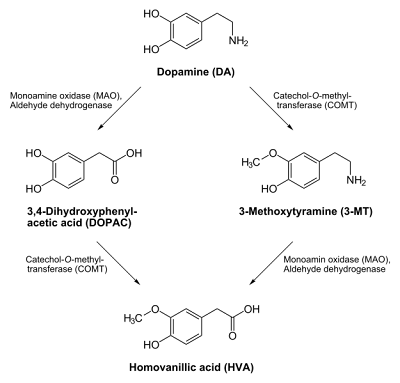 COMT (catechol-O-methyl transferase) is enzyme that deactivates dopamine, noradrenaline and adrenaline by transferring methyl groups to oxygen atoms in -OH groups. Catechol refers to carbon circle with 2 -OH groups. If something causes release of these 3 stimulating neurotransmitters (or estradiol which also has 2 -OH groups from cells then  COMT inactivates them around cells so they can't function anymore. In some people COMT works ~2-4 times slower than in others and that has effects on behavior and stress sensitivity. 1 letter mutation in DNA caused 158th amino acid in COMT to go from older valine (Val158) to methionine (Met158). Sometimes they are referred as A or G where letter A in DNA causes Met158 with anxious behavior and G in same place causing more daring Val158.  Every person has 2 versions of COMT and each parent inherits 1 version to offspring. About 25% of people through all races have Met/Met who degrade dopamine and adrenaline ~2-4 times slower than Val/Val who also form about 25% of people. Other 50% of world population has Val/Met and as both types are produced together their speed is somewhere between other 2 groups.

Several sources describe Val/Val as "warriors" (they do seem to fight and vandalize more) while Met/Met get described as "worriers" who are easily anxious and more cautious. Both are likelier to use illegal drugs than Val/Met and seem less generous if given choice to donate or keep money.

If differences in labeling are so different (warrior vs worrier) then it's likely it shows clearly in behavior in which group someone may belong to and even primary school kids can learn, that quarter of classmates are probably born reckless and daring while another quarter is always cautious and more introverted. This way they may not try to make behavior of others like theirs thinking it's all about how their parents raised them or due to some childhood trauma.

In Met/Met individuals levels of dopamine tend to be higher in lower prefrontal cortex (almost only brain region studied that i found besides basal ganglia) and it can help with thinking but only within narrow levels of dopamine. Those with Val/Val may think clearer with amphetamines as those with Met/Met as too much dopamine disrupts thinking.

Ability to feel reward or pleasantness tends to increase with each Met allele. What Val/Val experienced during “very pleasant event” was same as Met/Met felt during “bit pleasant event”.

These alleles seem to have major influence on drugs of choice. In general those with Val/Val are more likelier to become alcoholics who probably use tobacco while those with Met158 have about 2 fold higher likelihood of trying cannabis, tend to like cannabis more and also tend to like crack. 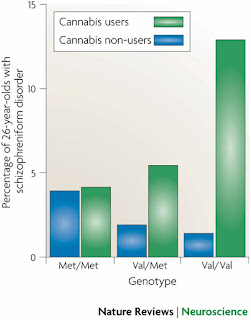 Cannabis psychosis is likely among Val/Val including hallucinations during cannabis effects but Met/Met tolerate cannabis without getting psychosis.

Cannabis gave hallucinations to those with Val allele but not to those with Met/Met alleles.
Val carriers with childhood abuse are more vulnerable to cannabis psychosis.


On the other hand Met/met show most psychotic responses to stress. 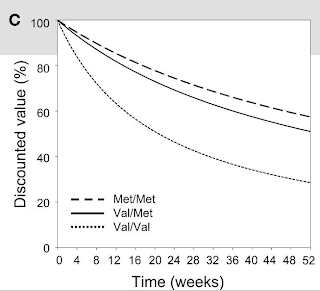 Those with Val/Val were more impatient when considering future payoff while those with Met/Met valued bigger reward after year of waiting ~2 twice as much as Val/Val.
Those with Val/Val had less gray matter in cortex and dopamine producing ventral tegmental area. Met caused bigger ventral tegmental area.
COMT also degrades estrogen. Lower activity COMT is likelier to cause pre-eclampsia which could cause eclampsia and seizures along with higher blood pressure. COMT KO mice get pre-eclapmsia type symptoms.

Study on Wall Street traders: Val helps with cognitive flexibility but Met helps with focused attention, higher loss aversion and decreased impulsivity. Those with Val/Val had worked on average ~6 years and those with Met/Met had worked ~10 years. 31% of traders studied had Met/Met combination so not much more than average in general population.


Sometimes met allele has been associated with better working memory and larger hippocampus among whites but in Chinese volunteers it was opposite and val allele had those advantages including bigger hippocampus.

Met allele may cause bipolar behavior in at least Han Chinese.

Reaction times are same between Val and Met but Val individuals were less accurate in processing incongruent items. Higher activity in anterior cingulate cortex (attention area) in Met individuals helped with accuracy. Those with Val had more activity in middle frontal gyrus.

In study with Chinese schizophrenics and controls, Met and Val didn’t seem very influential on disease but there was slightly increased likelihood for Val alleles to be found among schizophrenics.

Met/Met tended to drink 27% more alcohol weekly than other groups. That study was done with 896 Finnish men who were questioned about their alcohol consumption.

COMT barely if at all affected start of Parkinson's disease (~16 000 individuals tested) as those with Met/Met who got Parkinson's 1,9 years older than Val/Val but among women this difference was 0,2 years. Oestrogen inhibits COMT mRNA expression in cells that have oestrogen receptors and this may explain why females are less likely to have much influence by COMT.  In middle aged men COMT levels rise.

Those with met have slightly higher neuroticism, lower extraversion (up to 10% point difference in questionnaire points) and it is more clear in females. Early life stress didn’t seem to be significant. 486 individuals were tested and questioned. 37% of them were Met/Met and 20% Val/Val. Those with early life stress were more likely to show neurotic tendencies (3,4%) and more openness to experience (2% difference).  Met and Val seemed more powerful than early life stress at determining those character traits

Those with Met/Met seem to be more sensitive to pain. Met/Met had less effects from mu-opioid system and that may have added more sensitivity to pain.

Those with at least one Val donated twice  as much as those without it. 101 German participants were given ~5 euros which they could keep or donate to charity that helped little girl who made bracelet they were shown. On average all groups decided to keep most of the money and Met/Met gave ~25% of what they got. Possible that "worriers" were not trusting the charity as dopamine is involved in creating pair-bonding like oxytocin.

Study among Native Americans showed alcoholics and smokers tended to have at least 1 Val allele compared to nondrinkers and nonsmokers.

Testosterone is often associated with more aggressive behavior and increase in COMT activity can have effect of getting closer to "warrior" type of Val/Val.

Those with Met158 may do better stable working memory tasks but are worse when needing to change or shift tasks. Also in emotional tasks they may do worse and their limbic system is more active and they are more likely to have anxious phenotype. Those with met allele were twice as likely to relapse if they were alcoholics.

In COMT met/met polymorphism may double prevalence of cannabis use in lifetime.

~25% of black people have also Met/Met but among black cocaine users it is 35%.

Outtakes from book with several pages about COMT (haven't read entirely). Depending on start codon COMT is in 2 isoforms. One membrane bound and another soluble which have different capacity and affinity for catechols. In brain they are membrane bound and good at binding to catecholamines but elsewhere they are soluble. Met version is less thermally stable and at 37 C Val is more stable and faster. COMT has gender related activity as COMT in men tended to work ~17% faster in prefrontal cortex and ~30% faster in liver than those in women even if Val and Met combinations were same. For some reason COMT in females is slower although they produce it in same or higher amounts than men

Considering how common and influential these COMT variations it is likely many want to find out who is likely to behave how and curiosity alone could mean billions in revenue to gene testing companies. It may be possible that in next 50 years gene tests may create total revenue of over trillion euros divided by many gene testing companies if each allele test is tens of euros. Partly people want to know how much of their behavior and health is likely affected by genes but so can governments, companies and other employers publicly or secretly test people to know if they are likely to have certain vulnerabilities or strengths. Effectiveness of drugs could also be predicted by gene testing as drug preferences can demonstrate. Also these small mutation mappings can be used to trace ancestry and find if someone attractive or just potential partner is too closely related.
Posted by Märt at 9:15 PM No comments: