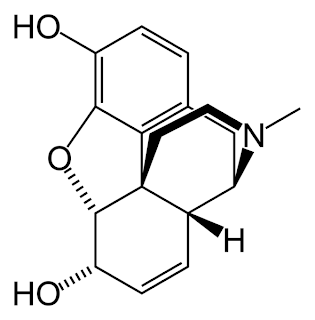 Half-life of morphine is 1,5-4,5 hours if it was dosed with injections to spine, muscles or veins. In people with kidney damage morphine half-life is about 80-140 hours. Lethal dose for adults is 300-400 mg. For smaller children 30 mg is smallest mentioned known lethal dose. Main risks from overdose are related to dangerously slowed breathing. In 1 mentioned case in that source a 7 year old girl had long lasting slowness of breathing. Her levels of M6G (created in body by modifying morphine) were 10 times over levels normally seen and M6G has some effects similar to morphine so the half-life of morphine doesn't mean it gets turned into something without any of the effects morphine causes.
People with overactive thyroid gland have less problems with breathing after morphine than people with normal thyroid activity.
Morphine can cause seriously low blood pressure by widening blood vessels and that becomes more likelier after blood loss or dehydration.
It also activates smooth muscles around at least bladder and urethra causing feeling of full bladder by squeezing bladder but also inability to urinate due to constricted urethra. Smooth muscles also activate in biliary tract and in lungs constricting them both after morphine.
Teratogenic effects have not been found with human fetuses.

Prolactin is neurotransmitter that blocks effects of dopamine. It is mostly released after orgasm but morphine and other opioids also cause release of prolactin. This may be the reason why endorphins released by orgasm release prolactin and cause lack of motivation and reduced interest in sex.

In 1 study volunteers got different doses of oxycodone and morphine and personal experiences got summarized in this table. 30 mg of morphine was described as more pleasant than 60 mg of morphine while higher dose caused more discomfort.

According to morphine experiences described in Erowid many users got unpleasant side effects like nausea, vomiting and inability to urinate. 60 mg dose seemed to be highest dose people enjoyed but more than that tended to cause worse experiences like vomiting. According to one experience by patient in hospital 48 hours of continued morphine use (new dose every 4 hours) was enough for withdrawal. He got out of hospital on 3rd day and got very nauseous when he moved his head. He also got irritable, impatient and intense pain with mild fever.

Morphine could slow growth of tumours along with growth of blood vessels into tumours. At concentration of 300 ng/ml morphine reduced capillary density in tumours by about half and vessels in tumours looked ~4 times shorter. If morphine was given with mu-opioid rceeptor blocker or in cells without mu-opioid receptors then blood vessels growed normally. Slowed growth of blood vessels could be result of morphine blocking normal hypoxia reactions. If tumours grow larger they will need growth of vessels to keep inner cells alive. Lack of oxygen makes inner cells of blood vessels release VEGF and other similar molecules that stimulates vessel growth but morphine blocks release of VEGF. Beta-endorphine has similar slowing effect on blood vessel growth.
Morphines effect on tumours is not consistent and even with breast cancers alone some studies find slowed growth and other studies find faster growth.

Morphine rule refers to which type of molecular structure some substance need to have effects of morphine or other mu-opioid receptor agonists. Usually such molecules need at least 1 carbon ring (preferably with OH group) and 1 nitrogen atom connected to this ring with 2-3 carbon long connection between nitrogen and ring but molecule doesn't need to strictly have all these attributes. This morphine rule is easier to see in morphine although fentanyls have many examples of nitrogen atoms connected to carbon rings by 2-3 carbon atom long chains.

Human body creates endogenous morphine. Exact synthesis pathway was studied in neuroblastoma tumour cells. These cells were given different substances with radioactive labeling and later they checked if produced morphine had that radioactive isotope used for labeling. It started with amino acid tyrosine which got turned into dopamine and several steps later codeine and morphine. Authors said this synthesis pathway is similar in opium poppies. Pathway found: 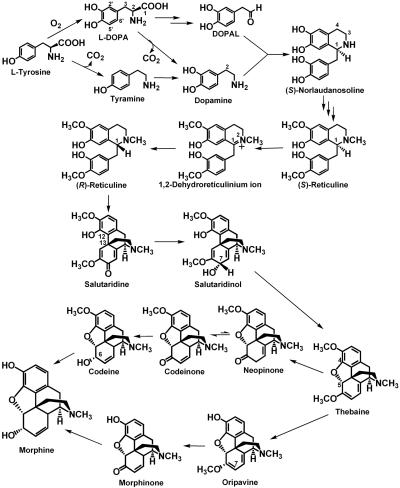 
Human white blood cells release their morphine stores in contact with nicotine, cocaine and ethanol. Nicotinic acetylcholine receptors seem to start this reaction. If rats were given 0,0001 mg nicotine per kg of body mass then it amplified pain reduction from morphine but not if rats didn't get morphine. Nicotine dose was low enough for humans to achieve.

My first experience with morphine and poppies was when i was 17 and it took about 6 more months before i dared to try cannabis at age 18. Surprising thing was that low dose felt very natural. Compared to laughing gas, cannabis or alcohol poppies gave very normal feeling good mood. In small doses it was hard to see how this felt different from natural happiness.
Opiates worked fast and poppy tea could work within 10 seconds. Often i felt something relaxing flowing from my throat to lower ribcage. After getting close to heart it spread fast through body so i could feel it move towards the tips of my hands and legs. If that sensation moved up the neck then in 1-2 seconds it was followed by laughter from joy like something really good happened and i couldn't contain my joy. Brain reacts fast when morphine reaches it. Like with laughing gas it caused laughing not because i thought something funny but this feeling of something vaguely good was so pleasant it causes laughter.
Calm pleasant mood can last about 20 hours.

Opioids made me asexual and almost unable to have orgasm while benzodiazepines make orgasms easier to get. While benzodiazepines can cause memory loss i never noticed any memory problems with opioids. I actually tend to remember days on opiates bit better then other days. Cannabis can cause much more intense un-sober and retarded feeling state than opioids.

Often it caused hunger for fatty foods and that's partly how i got idea that fatty acid receptors and opioid receptors could be "relatives". I recently drank about 1 gram of sunflower cooking oil and it was almost identical to effects of poppy tea. Both started to work in 10 seconds and gave similar warm buzz or chaotic tingling through body for several minutes.
I suspect people could get quite realistic sense of opiate withdrawals if they avoided fatty foods for even 1 day (especially if they are used to eating stuff slippery from fat). By evening it should have caused bitter taste at back of mouth, restlessness, tiredness, headache, anger over world and many people even if they are friends or pleasant relatives.

Scariest side effect was slow breathing and lack of suffocation reactions when i hold my breath. Weakness is also bit scary as adrenaline type reactions seem to switch off with higher dose.

I got several similar experiences with codeine that is available as over the counter medicine. If people would like to know how would world look if people could by opiates freely then check how Europe and probably entire America has been doing as it is available and has been for long time. In practice laws have made it even more dangerous by often insisting that codeine is only allowed with paracetamol that could damage or kill liver.

I've seen hallucinations with opiates maybe twice. On first case i wasn't certain what caused it because i got nameless painkillers after surgery with general anesthesia. After taking pill i noticed i couldn't go to sleep because when i closed my eyes i started to see scary nightmares about scalpels cutting through fat body parts with cutting sometimes exposing fetus like things etc. so sleeping was hard to achieve. When i fell asleep i remember dreams started again with scary themes but last dreams that night slowly became more pleasant.
Second time i got nightmares was when i ate about 12 poppy pods. I wasn't even sure they worked but when i went to sleep about 5 hours later i noticed again that when i closed my eyes i started to see scary stuff in darkness. For example i saw zombi like creatures with details like they were taken from some early 1990's 3D computer game with very blocky shape.
This 12 poppy experience was 1st day of my more serious opiate addiction as i continued eating them for next 5 days but with increasingly smaller doses. By about 3rd day i noticed headaches. All days started fine but by afternoon (18 hours after dosing) withdrawals started. On last day i ate them withdrawals had got quite disturbing. Headaches started around noon. Around 3pm i got nausea and depression. By 5pm i was close to vomiting so exhausted i tried to fall asleep but didn't succeed in that. I felt like i was sick with fever and clogged sinuses. After eating maybe 1 poppy pod i got my energy back and nausea disappeared along with headaches. Next day i took pregabalin (i get it for anti-anxiety effects) that is sometimes used against opioid withdrawal and it partly helped but after smoking hash i got rid of withdrawals and after that day i didn't have serious withdrawals but i also started avoiding poppies.

Surprising thing was that calming opioids have withdrawal that causes much worse tiredness but after recent opioid dose it is hard to fall asleep as bed feels too cozy and pleasant to end this feeling with sleeping.
Posted by Märt at 4:54 PM