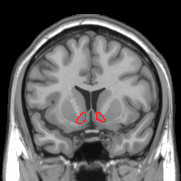 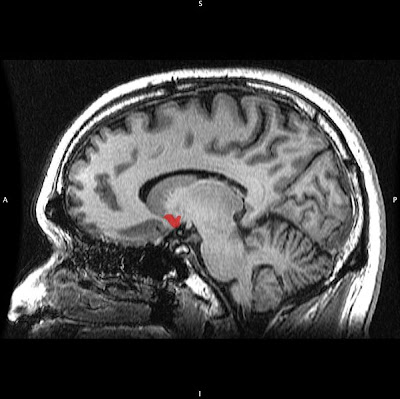 In above images red shows nucleus accumbens (it's hard to find clear photos of septal nuclei) which are almost between brain hemispheres and it is one of the main known pleasure center. Other potential pleasure nuclei are the closest nuclei in few cm radius. There is a thin membrane (septum pellucidum) between brain hemispheres and septal nuclei are in front and below it.  Septal nuclei (sometimes called septal area) are right above n. accumbens and ejaculation/orgasm causing medial preoptical hypothalamus right below nucleus accumbens.
Subthalamic nuclei are about 1-2 cm towards back of head from nucleus accumbens. Also the side of upper brainstem that is closest to this red area has almost all brain dopamine with subthalamic nuclei in middle of them.

Electric stimulation of subthalamic nuclei can make people laugh. All 4 areas seem to activate during sex and seem to activate whenever anything pleasant is experienced from happy thoughts, sweet taste to any pleasant drug. That entire area in brain seems as some pleasure center with nucleus accumbens (NA or ACC) at its center. 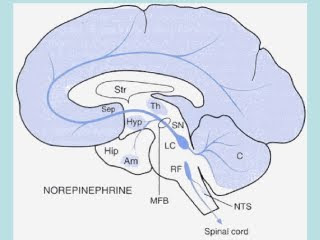 (image source)
Main pleasure inducing nerve bundle could be medial forebrain bundle (MFB) on upper image. It transports noradrenaline (from locus coeruleus  (LC)), serotonin from raphe nuclei (from middle of brainstem) and dopamine from substantia nigra (SN). MFB passes hypothalamus, thalamus and septal nuclei spreading it's contents diffusely all over the brain starting from pleasure areas and frontal lobe. Axons in this bundle usually release their contents little bit away from target neurons and these neurotransmitters spread to target areas.
Maybe that bundle is the reason why intense adrenaline rush feels good. Noradrenaline passes pleasure centers and even no problems are noted then it gives a relieved excited joy. In evolution it could add bravery by rewarding risking with stimulated pleasure areas (any time brain gets adrenaline or noradrenaline these substances first stimulate pleasure centers due to bundle going between them).
This could also give some euphoria and anesthesia rush before sudden emotional death.

First areas reached by MFB are in brainstem and hypothalamus to septal nuclei may be more involved with inner feelings. Adrenaline and dopamine reach then attention/planning frontal cortex and lastly to more sensory back of the head. Maybe if the brain cortex areas don't notice anything to worry then only stimulated inner sensations remain.

If men went to fMRI scanner after mastrubating to orgasms then their septal area (along with amygdala and frontal lobe) showed increased activity. In septal area this increased blood use lasted for about 15 minutes.

Septal nuclei are at least partly needed for memory because hippocampus need acetylcholine to remember stuff and it gets it through septal nuclei. Damaging septal area causes problems in remembering surrounding. Septal area is also only area i know that can keep reduces anger while it works. Searching "septal rage" gives many examples about animals getting emotional and aggressive after septal injury.

Septal rage in male rats was not affected in symptoms or duration when they got adrenal glands or testicles removed (testicles don't seem to trigger aggression).

12 chronic pain patients out of 19 got "satisfactory" pain relief if they could stimulate septal area with electrodes.

In 1960-1961 one 34 year old woman with epilepsy got some brain electrode and cannula (needle) in septal area for drug injections. Through that she got injected with acetylcholine 12 times and 4 times with noradrenaline. These injections caused mild euphoria, sexual arousal and usually caused several repeated orgasms. She didn't have known epilepsy during the 4 month test period.
When 24 year old man got septal electrodes 10 years later he could stimulate many areas in limbic system but he preferred to stimulate septal area. One time he stimulated himself 1500 times. Stimulation usually caused euphoria, goodwill, alertness and sexual arousal.
In another case around 1971 with 24 year old homosexual patient with septal electrode it seemed to alter his sexuality.
Only pleasant stimulation location for him was in septal region and used electric current was 0,5-7,5 mA. Stimulation lasted 1 second.
He described the good feeling it gave as similar to amphetamines he had used. Patient got to see heterosexual porn movie that he didn't seem to like first time when there was no septal stimulation. Later with active septal electrode he masturbated to orgasm and seemed to like it more.
Finally as patient was interested in experimenting with heterosexuality he had sex with a prostitute while he had brain electrode wires attached. Electric activity was recorded during sex. With increased arousal electrodes started to pick up delta waves (~1-4 Hz) and shortly before orgasms electrodes started to pick up waves similar to epilepsy with slow waves and short spikes mixed with higher frequencies. Epileptic activity in septal nuclei lasted through orgasmic phase but other waves could be results of moving during sex.
After that experience patient had a almost 10 month secret relationship with a married woman.

Brainmaps.org has photos of brain slices that you could zoom to level where you could see separate neurons. This place have slice collections where different parts of cells got colored.
Cell density seems almost identical through all brain nuclei making cell density look unrelated to pleasure. 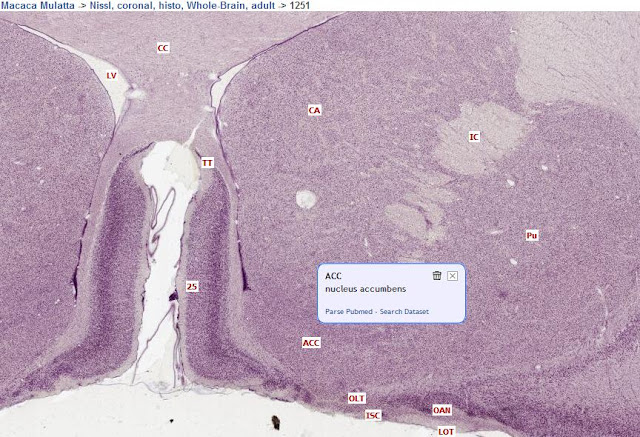 Nissl staining colors only cell nuclei and in all cell types. NA looks almost identical to other brain nuclei with this staining although it seems midly darker and dense. Other labeled areas below ACC all deal with smelling. If you want to photo without marked NA/ACC then check pictures where connection between putamen (Pu) and caudate nuclei (Ca) connect in the underside of brain because ACC connects these 2 larger nuclei. 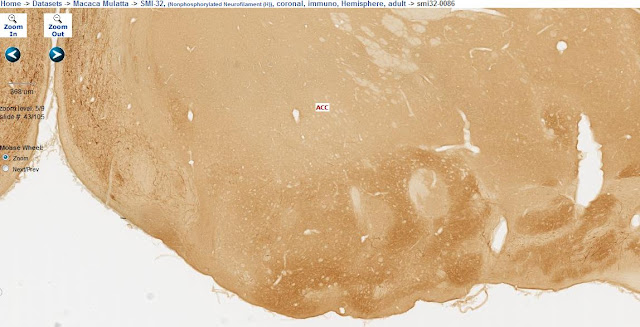 ACC looks different with colored neurofilament H which is only in neurons and axons. This coloring selectively colors neurons. ACC seems to have dark colored sponge-like area near it but not much more is visible.

On some slides (more towards back of head) ACC has very visible dark bundles under it that get thicker closer to the middle of brain hemispheres.
Posted by Märt at 5:10 PM

Healthline.com recently launched a free interactive "Human Body Maps" tool. I thought your readers would be interested in our body map of the Hypothalamus: http://www.healthline.com/human-body-maps/hypothalamus

It would be much appreciated if you could include this tool on http://interestinmind.blogspot.com/2012/06/pleasure-center-septal-nuclei-nucleus.html and / or share with friends and followers. Please let me know if you have any questions.

Thank you in advance.
Warm Regards,